For a long time, self-driving cars were found only in science fiction movies and series but now they are becoming a reality. The opportunity to pick such a vehicle at a car showroom near you is closer than you think.

For autonomous vehicles in complex scenarios, environment perception, that too very accurately and quickly, is a very important task, e.g., for detecting objects or other traffic participants or for determining its own position in the surrounding world.

Autonomous systems are usually equipped with multiple sensor types such as radar sensors, ultrasonic sensors, and particularly cameras to cover as much of the environment as possible. Compared to widely used LiDAR-based mapping in the autonomous driving field, image-based mapping methods have the advantages of low cost, high resolution, and no need for complex calibration. Furthermore, they provide visual information similar to human eyes.

Hence, Stereo Vision, which is the technique of obtaining depth information and 3D geometry from images alone has been introduced, as we can also see in the image below. For this, two images are used, which are generally captured from two different cameras placed on a fixed rig, separated by some distance. 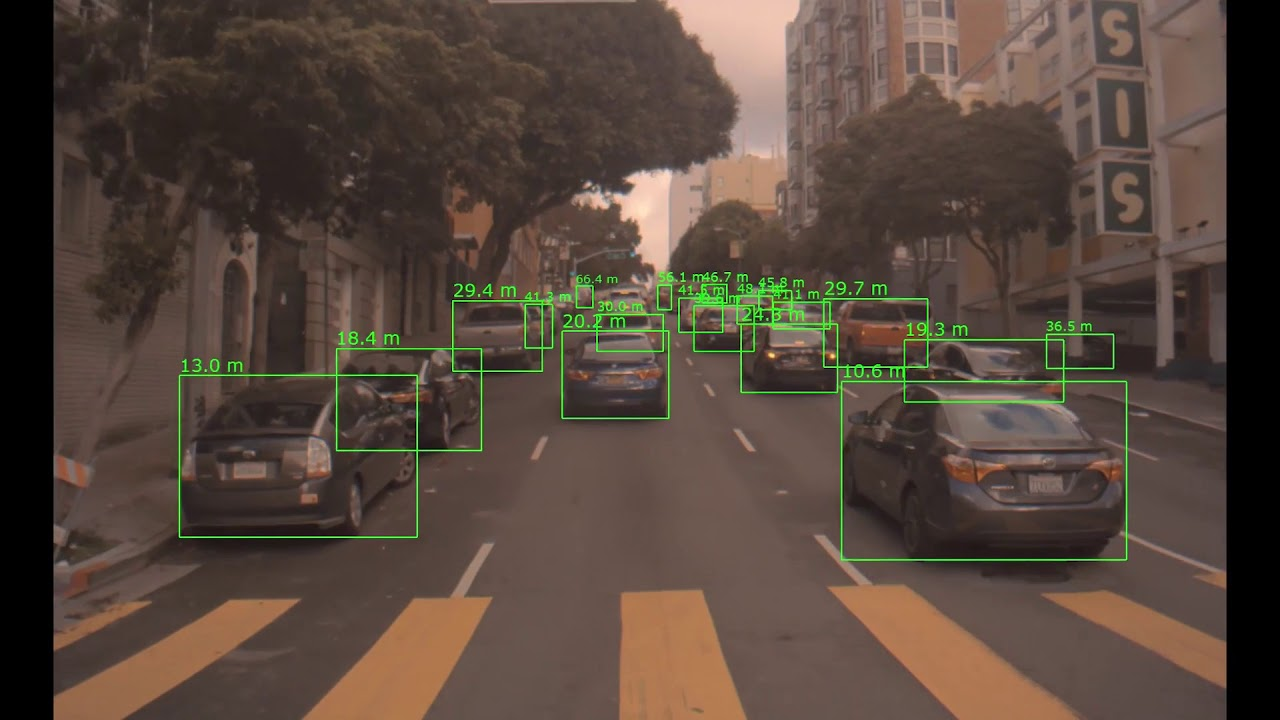 Computer vision is one of the toughest problems in Artificial Intelligence (AI) that has been challenging researchers and engineers for decades. This problem of extracting useful information from images and videos finds application in a variety of fields such as robotics, virtual reality, autonomous vehicles, etc.

Autonomous navigation has attracted an unprecedented level of attention within the intelligent vehicles community over the recent years. The concept of making cars drive by themselves has gained immense popularity today in the AI world, mainly motivated by the number of accidents that occur due to driver errors. Autonomous vehicles are designed to sense their surroundings and identify its position, velocity & the obstacles around it. The vehicle can then decide what it has to do given the situation it is in.

Stereo vision refers to the task of obtaining depth information or reconstructing a 3D shape from two calibrated overlapping images. The images can be obtained using two cameras placed at some distance or one moving camera.

Stereo Vision for Self-Driving Cars is becoming more and more popular these days, especially for obstacle detection. One of the essential problems in self-driving cars is to identify objects around them. Obviously that’s crucial for a car to navigate its environment. Obstacle detection algorithms provide 2D Bounding Boxes giving the obstacles’ position in an image. Today, most object detection algorithms are based on monocular cameras and cannot return the distance of each obstacle.

To return the distance of each obstacle, engineers generally fuse the camera with LiDAR (Light Detection And Ranging) sensors that use lasers to return depth information. Outputs from Computer Vision and LiDAR are fused using Sensor Fusion. The problem with this approach is the use of LiDAR, which is expensive and energy inefficient. The common belief was that you couldn’t make self-driving cars without LiDARs.

But, recent research has proved that it is not completely true. They align two cameras and use geometry to define the distance of each obstacle: which we also know as a Stereo Camera setup. They rely on two perspectives to establish depth, just as human eyes do. They can achieve the same (or even more) accuracy as Lidar sensors, which makes them a viable and low-cost alternative to LiDAR.

You can see the difference between monocular vision and stereo vision in the image below.

Image-based methods provide a fast way of capturing accurate 3D content at a fraction of the cost of other approaches like radars and lidars. The steady increase of image resolution and quality has turned digital cameras into cheap and reliable high resolution sensors that can generate outstanding quality 3D content.

Hence, stereo cameras are crucial sensors for self-driving vehicles as they are low-cost and can be used to estimate depth. Accurate estimation of dense depth maps is a necessary step for many problems such as obstacle detection, free-space detection, localization, mapping, path planning and lane boundary detection.

Let us first try to understand more about what Stereo Vision actually is.

What is Stereo Vision?

Gathering depth information and reconstructing 3D geometry from photographs is a classic Computer Vision problem that has occupied researchers for more than 30 years. Only recently however have these techniques matured enough to exit the laboratory controlled environment into the wild, and provide industrial scale robustness, accuracy and scalability.

Stereo vision is the process of extracting depth information and 3D geometry from passive 2D images captured by stereo cameras without the need for dedicated active light-emitting range measurement devices like Lidars. Stereo vision is used in applications such as advanced driver assistance systems (ADAS) and robot navigation where it is used to estimate the actual distance or range of objects of interest from the camera (or vehicle).

In simple words, binocular stereopsis, or stereo vision, is the ability to derive information about how far away objects are, based solely on the relative positions of the object in the images obtained from the two cameras, which imitate the two eyes in humans. So, a stereo camera comes with two image sensors (cameras) to simulate human binocular vision, giving it the ability to perceive depth. This is similar to the biological process of stereopsis in humans.

The goal of a stereo vision algorithm can be described as “given two photographs of an object or a scene, gather depth information and estimate the most likely 3D shape that explains those photographs, under the assumptions of known materials, viewpoints, and lighting conditions”.

Generally, in stereo vision technique, two cameras which are positioned parallel to each other are employed to see the same object. The two cameras are displaced horizontally from one another and are used to obtain two differing views on a scene.

Features like corners can be easily found in one image, and the same can be searched in the other image. Alternatively, the disparity between the images can be found to get the indicative regions in the other image, corresponding to the same regions in the first image, for which a small search can be used. The disparity helps to get the depth of the point which enables projecting it in a 3D world used for navigation.

In a nutshell, to compute depth based on the binocular disparity between the images of an object obtained from the left and right cameras, the system matches features in the two images, that is, identifies features of the same point in the left and right images of the visual scene. So, 3D information can be extracted by examining the relative positions of objects in the two images.

There are generally two types of stereo camera setup :- 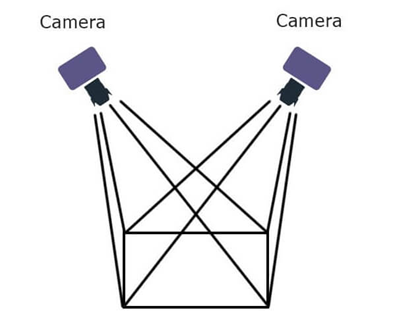 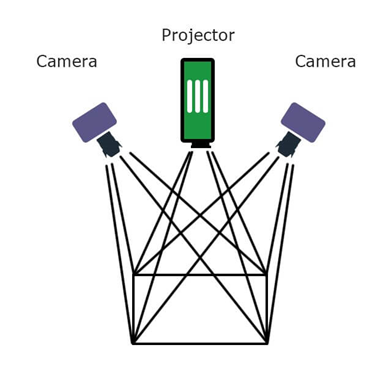 You can learn more from here: Clumsy Cyclops- How does Stereo Vision work? Stereo vision based semantic 3D object and ego motion tracking for autonomous driving

Stereo Vision is one of the most important components of 3D reconstruction and is also used in many other applications such as 3D movie recording & production, object tracking, machine vision, range sensing, 3D mapping & navigation, 3D printing, computer video games, autonomous driving and cultural heritage archival. It has also been shown in several cases that stereoscopic vision can be applied to extract useful information about the surroundings that could assist the navigation of mobile robots.

Now let us try to understand how we can achieve stereo vision.

How is Stereo Vision Achieved?

Stereo Vision is about finding depth based on two images. Our eyes are similar to two cameras. Since they look at an image from different angles, they can compute the difference between the two points of view and establish a distance estimation.

Similarly, from 2 cameras, we can estimate the depth and retrieve the distance of an object. This is the principle of triangulation, and this is the core geometry behind Stereo Vision. This is done in 5 simple steps: 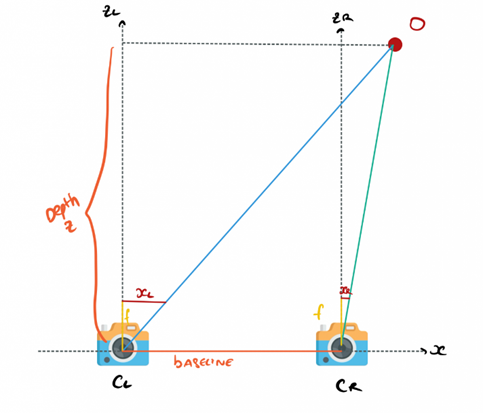 This is how we can build a stereo vision system. With stereo vision, we can not only detect the obstacles in the image, but also their distance to the car.

Stereo vision is the extraction of depth or 3D information from digital images. By comparing information about a scene from two cameras placed at two different points, 3D information can be extracted by examining the relative positions of objects in the two images.

Stereo cameras are crucial sensors for self-driving vehicles as they are low-cost and can be used to estimate depth, which is very necessary for the self-driving car to understand its surroundings accurately. It can be used for multiple purposes, such as object detection, depth estimation, etc.

Stereo estimation has shown great progress in the last years both in terms of accuracy and efficiency.

Stereo matching is equivalent to searching for correspondences in two images based on the assumption of constant appearance. However, appearance frequently changes due to non-rigidity or illumination changes.

Furthermore, saturated pixels, occluded regions, or pixels leaving the frame cannot be matched. Therefore, failure in those cases is inevitable for methods that solely rely on appearance matching without any other prior assumptions about the geometry.

The most common examples of failure cases in the autonomous driving context are car surfaces that cause appearance changes due to their shiny and reflective nature. Similarly, windows that are reflective and transparent cannot be matched reliably.

Occlusions are another source of error and require geometric reasoning beyond matching. Other examples of problematic regions include thin structures like traffic signs or repetitions as caused by fences.

The dream of safe self-driving cars can be truly realized only after we overcome all such challenges.