Autonomous vehicles have been a long-awaited dream for so many of us in artificial intelligence. About 30 years ago, Dickmanns and Zapp integrated several classical computer vision algorithms in a system that would drive their car automatically on a highway, and ever since that the technology has been growing.

Autonomous vehicles need to be able to perceive both the presence and motion of objects in the surrounding environment to navigate in the real world.

For this, autonomous vehicles receive and have to process sensory information coming from the surrounding world. A major sensory input is vision and it is a challenge to extract all the relevant information from road image sequences acquired by a camera mounted on the autonomous vehicle. The vision systems of these vehicles are focused on the detection of those features necessary to control the steering position and the detection of obstacles. The control of self-driving cars has received growing attention recently.

Motion detection is a fundamental but challenging task for autonomous driving. Self-driving cars use optical flow networks to estimate the motion of objects on the road. This is later used for making decisions to control the car.

Motion estimation, that too in real-time, is very important for realizing a self-driving car as we need to predict the motion of other objects surrounding the car well in advance to predict & avoid possible collisions, adjust the speed of the vehicle and achieve safe driving, just like we humans do when we drive.

Recent breakthroughs in computer vision research have allowed machines to perceive its surrounding world through techniques such as object detection for detecting instances of objects belonging to a certain class and image segmentation for pixel-wise classification.

However, for processing real-time video input, most implementations of these techniques only address relationships of objects within the same frame, disregarding time information. In other words, they evaluate each frame independently, as if they are completely unrelated images, for each run.

However, what if we do need the relationships between consecutive frames, for example, we want to track the motion of vehicles across frames to estimate its current velocity and predict its position in the next frame? 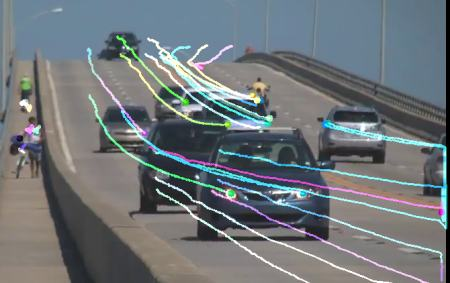 Optical flow provides essential information about the scene and serves as input for several tasks such as ego-motion estimation and object tracking.

You can read more about ego-motion estimation and object tracking in our other blogs. (Links)

Hence, optical flow is one building block of a self-driving system, just like depth estimation, object detection, and so on.

Let us start by understanding what Optical Flow actually is.

What is Optical flow?

Optical flow or optic flow is the pattern of apparent motion of objects or individual pixels in a visual scene caused by the relative motion between an observer and a scene.

In simple words, Optical flow is the pattern of motion of objects between two consecutive frames caused by the movement of an object or camera or both.

It is a 2D vector field where each vector is a displacement vector showing the movement of points or pixels) from first frame to second.

For example, in a traffic scene Optical Flow will show the motion of cars or pedestrians between two consecutive frames. To show this, generally, displacement vectors (or arrows) are used which will point towards the direction of movement of the object (or feature) they represent. Sometimes, the length of the arrow may represent the velocity of the object or feature.

We can also see a similar example in the image below where the optical flow of a traffic scene is shown and each arrow points in the direction of the predicted flow of the corresponding pixel. 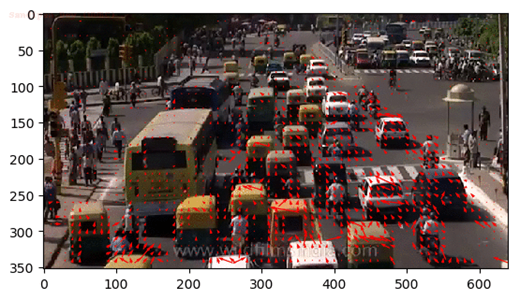 To predict (or calculate) the position or speed in the next frame, generally the change in position of the pixel (or feature) or object in the last two frames is observed with respect to time.

Generally, there are two types of Optical Flow :

There may be scenarios where you want to only track a specific object of interest (say tracking a certain person) or one category of objects (like all 2 wheeler-vehicles in traffic). We can combine Object Detection with this Optical Flow method to only estimate the flow of pixels within the detected bounding boxes. This way we can track all objects of a particular type/category in the video.

Let us now try to understand how Optical Flow is achieved.

How is Optical flow achieved?

Consider a pixel I(x,y,t) in the first frame. It moves by distance (dx,dy) in the next frame taken after time dt. So since those pixels are the same and intensity does not change, we can say,

From this, we can obtain the optical flow equation by first taking taylor series approximation of the right-hand side, then removing common terms and finally dividing by dt. We’ll get the following equation:

Above equation is called Optical Flow equation, where:

Here, fx  and fy are image gradients. Similarly ft is the gradient along time. But (u,v) are unknowns. We cannot solve this one equation with two unknown variables. So several methods are provided to solve this problem and one of them is Lucas-Kanade. Let us discuss it briefly.

We have seen an assumption before, that all the neighboring pixels will have similar motion. The Lucas-Kanade method takes a 3x3 patch of pixels around the point (pixel). So all the 9 points have the same motion.

We can find (fx, fy, ft) for these 9 points. So now our problem becomes solving 9 equations with two unknown variables which are over-determined.

Below is the final solution which is two equations-two unknown problems which can be solved to get the solution.

But, despite the long history of the optical flow problem, occlusions, large displacement, and fine details are still challenging for modern methods.

Nowadays, many end-to-end deep learning models like the Flow-Net, SpyNet and PWC-Net are available, which gives great accuracy in real-time. But, a big problem that remains for deep learning models is the limited amount of training data, which is not able to cover all scenarios.

Another fundamental problem with the optical flow definition is that besides the actual motion of interest, illumination changes, reflections, and transparency can also cause intensity changes.

Also, it is easier to deal with small motions, but most optical flow algorithms fail when there is a large motion.

Fundamentally, optical flow vectors function as input to many higher-level tasks requiring scene understanding of video sequences while these tasks may further act as building blocks to yet more complex systems such as facial expression analysis, autonomous vehicle navigation, and much more.

Robust optical flow methods need to handle intensity changes not caused by the actual motion of interest but by illumination changes, reflections, and transparency.

Reflective, and transparent regions also result in large errors in many cases. A better understanding of the world is necessary to tackle these problems.

A highly accurate and very fast optical flow algorithm is necessary to build an autonomous vehicle. Still, there is a lot of scope for research in this field.

Although, it is completely true that technology is growing very rapidly and we may see fully autonomous vehicles on roads sooner than expected.